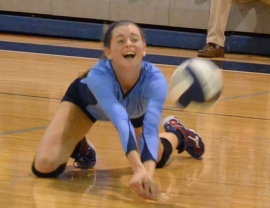 The Gaels typically lay down in the small gym, close their eyes and imagine what they want to accomplish and how they'll go about it. Coach Beth Grasso speaks to them in a soft voice during each themed session.

On Saturday, Oct. 23, the second-seeded Gaels, who pictured themselves climbing a ladder in keeping with the theme of teamwork, came through with a 25-16, 25-19 victory over sixth-seeded Morris Knolls in a Morris County Tournament semifinal at Randolph High School.

"We visualized about climbing a ladder," Roxbury senior setter and co-captain Kate Shirkey said. "Coach asked 'Who's the base? The middle? The balance?' It's because we all have to do out part."

The ritual is repeated before every match and pumps the Gaels up.

"Our seniors' theme was secret agent on a mission," Roxbury coach Beth Grasso said. "It means they're after something. This match was another hurdle to get over. It's bringing them closer to what they want."

"That loss was really, really tough," Shirkey said. "We had beaten Mendham prior to that. We knew we could have played harder, done better. We've come far by playing together. We've been waiting for this and want to push further."

The main objective was ball control, according to Shirkey.

"We wanted to let the other team make the mistake," she said. "We wanted to do all in our power to keep the ball on our side of the court. We couldn't let anything drop and had to keep our serves in."

Cook, Kormann and Tucker were formidable at the net, coming up with key blocks. The team's cohesiveness enabled it to get the job done.

"We just had to play our game and not let anything affect us," Shirkey said. "We used our team strength to get us through. We're all sisters. We trust one another."

Grasso was elated to about her team moving on.

"It was the same story but we wanted a different ending," Grasso said, referring to her squad's 2014 semifinal match versus Mendham. "We got conservative last year. We stopped swinging. We've been aiming for this since Day One."

West Morris, unbeaten after 21 matches, led by as many as nine points in its first game against Jefferson.

The Wolfpack, behind the serving of Melanie Brothers and Katie O'Keefe, had six and seven-point runs in the first game. The Falcons got kills and aces from its standout, Julia Murawinski, but that couldn't make up for early errors, probably the result of some first-time jitters.

Jefferson turned it around in the second game but West Morris, looking to secure a 13th MCT crown, prevailed. Murawinski put in a fine all-around effort, coming up with 13 kills and a number of aces and blocks. Schyler White was a major force as well.

O'Keefe finished with 12 service points for West Morris and Brothers and Danielle Wohning had nine apiece. Katelyn Paxson had 17 assists and Abigail Rec had eight kills to go along with eight digs.