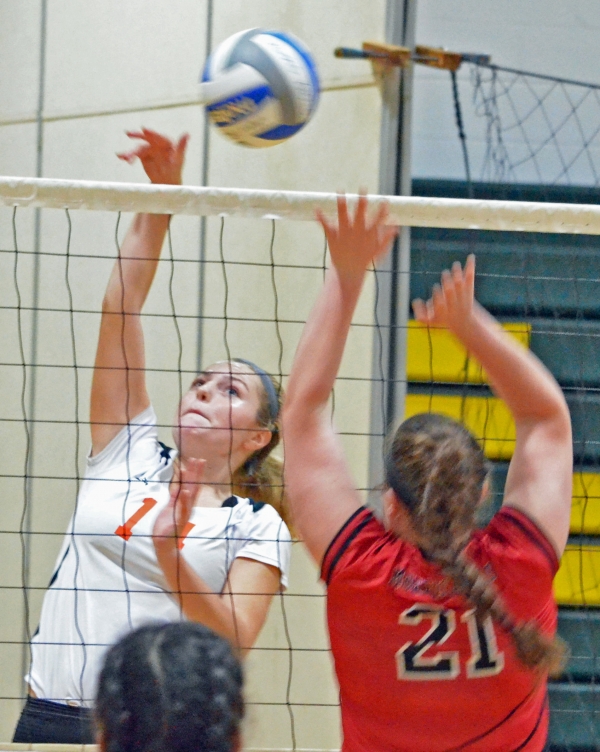 The Dodgers somehow would have to make do without Taylor, a junior, and McCullough, a sophomore, for an indefinite period of time.

Although young, Madison has filled those gaping voids for the first week and a half of the season, going 4-1.

"We're surviving," said Dodgers coach Stephen Fenton at the Eagles September Slam. "It's gone pretty well. We still have the same goals - to win our division, contend in the counties and be strong in Group II. With a little luck, maybe we can do all three. The future will look even brighter with the middles back."

Before the first official practice, Madison was a player down. Taylor, a junior, sustained a concussion while waterskiing. Not long after, McCullough, a sophomore, fractured her foot during a workout.

"It was tough to be without them," said senior co-captain Kelly Edwards, who filled in at middle along with Jenna Tierney. "We had to keep each other up. We have a lot of spirit. We bonded well. We're trying to be encouraging and uplifting. We make it work no matter where our coach puts us. He's big on everyone playing different positions. I'll go wherever he puts me."

Edwards, an opposite on her club squad, had no problem with the change. Neither did Tierney. Their ability to play anywhere ultimately will make the Dodgers deeper.

"Kelly and Jenna are both close to 6 feet tall," Fenton said. "They've handled it well. They'll play on the right side when the others get back. It'll give us strong blocking on that side."

McCullough made her season debut at the Morris Knolls Tournament, playing 20 minutes versus Governor Livingston. It is anticipated that Taylor will return to the court on Monday, Sept. 19.

That's good news for a team with only three seniors. The underclassmen, fortunately, are abundantly talented and should make major impacts.

Sophomore Eve Sherwood, a second-year starter, too, saw time at middle in the absence of her teammates. Sherwood, typically an opposite, is a superb passer.

"Eve can play anywhere - right, left, middle," Fenton said. "I have nothing but good things to say about her."

Kathryn Wilk, who started as a freshman last fall, is back at outside hitter. Jennie Scavone and Ivana Nikodijevic will serve as tri-captains along with Edwards.

"With everyone playing again, we'll be even better," Edwards said. "I think we'll be in all of our matches."

Sweetser, a three-year starter and one of four seniors on the Golden Eagles team, enjoyed cake at 10 a.m., making sure not to overindulge. She noted that she "hasn't had one birthday home doing nothing" because of her involvement in sports.

"This tournament is so much fun," said Sweetser, also a member of the basketball and softball teams. "We get to play and, when we're not, we're watching and learning."

In addition to Sweetser, the other seniors are Krista Mitaritonda, Andrea Pencak and Kaylie Slowkowski. They've helped Morris Knolls to a 3-1 record in regular season matches.

"We lost quite a few players so we've had to step up," she said. "We've got a really good offense. The back row is getting the ball higher. The middles are slamming the ball down."

Coach Jolyn Veres, willing to join in on intense practices, has stressed teamwork.

"We have to play together," Veres said. "There's no other way. We have no superstars."

Hanover Park, aided by the excellent efforts of junior outside hitter Jocelyn Tenore, was pleased to emerge as silver bracket champion.

The Hornets, looking to mesh entering the Eagles September Slam, appeared to have done so, defeating Parsippany in the final.

Tenore, only 5-foot-7, took over at outside hitter following the graduation of Chino Anukwuem, now at the University of Virginia.

"Jocelyn has taken over a leadership role even though she's a junior," Hornets coach Megan Wilson said. "I like her hustle and her ability to pick her teammates up. Jocelyn has a positive attitude and leads by her actions. She really loves the game."

***Please check back for more photos***

View the embedded image gallery online at:
https://soar-nj.com/sports/volleyball/item/1317-mk-vb-tourney#sigProIdca9be4c77e
More in this category: « Kinnelon fights until end, bows out Rams' aim is banner season »