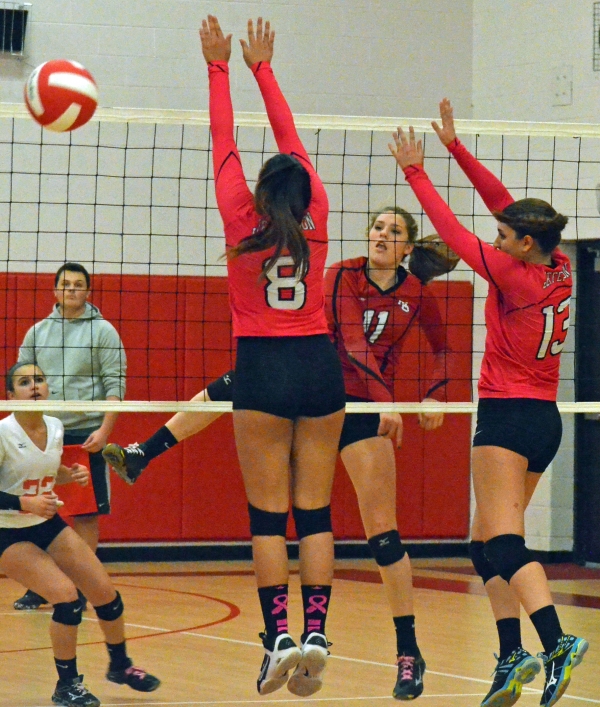 Photos by Sandy Seegers Mount Olive's Annie Karle sends a crosscourt kill over the net during a match versus Jefferson.
Rate this item
(13 votes)
Tweet

MOUNT OLIVE _ In a six-hour span on Saturday, Oct. 22, the Mount Olive volleyball team had maximum fun, prevailing in their Morris County Tournament semifinal over West Morris then getting together for an early Halloween party.

That was a lot for one evening but, for the Marauders, it was the perfect way to keep the buzz going. After defeating the Wolfpack, 25-13, 25-15, the girls were more than thrilled to spend more hours together at Julia Hutchinson-Lundy's house while dressed as hockey players, anime characters, nerds, rabbits and other animals.

"We were all in great moods," said tri-captain Ally Wisnewski. "We had just won so being together after the match was great. We were all so happy."

And for good reason. By ousting perennial power West Morris with a dominant performance, the Marauders earned themselves their first berth in the MCT final. Second-seeded Mount Olive (20-2) then went on to dominate top-seeded Randolph, 25-17, 25-17, for the title on Saturday, Oct. 29.

"It's been a really exciting season," senior outside hitter Stephanie Bigger said following Mount Olive's match versus Jefferson, the last warmup before the final. "We've never done this well. We all have such a bond. We keep each other up when we're down."

There have been a minimum of low points for the Marauders this fall. Not only are they exceptionally skilled, they get along beyond well.

"This is the second year together in high school for the core group," Mount Olive coach Lee Clowers said. "They were on the same team as seventh and eighth graders. They're a very hard team to put away. Five of the top seven players are involved in club so their volleyball IQs are really high."

Clowers said he needs to teach a concept once and the Marauders immediately catch on.

"They pick up things quickly," he said. "That's why we can make changes on the fly. It really helps. Another thing about these girls is that they're so cool. Nothing fazes them."

When trailing as they did in the second set of the match against the Falcons on Thursday, Oct. 27, the Marauders, not anxious for a third set, dug deep. Behind 24-20, Britney Rivera served five of the last six points to close out the match on Senior Day.

It's happened before, too, like when Roxbury surged ahead 22-13 but Mount Olive always manages to right itself.

"We work well on the court," Wisnewski said. "We know how to play with one another. We've got it down to a system. We play, scramble then put the ball down. We definitely know we can come back."

"That loss hurt," said Wisnewski. "We're out to win it. We don't care who we are playing. We're going to give our best and play our hearts out. We know what we're capable of and what we need to do to be successful."

Mount Olive, of course, was out to avenge its setback to the Rams and did so, riding a stellar performance by junior outside hitter Annie Karle. The players felt getting an early lead would be critical.

The seniors in the mix are Bigger, Caroline Lidwin, Hutchinson-Lundy, Thaliana DeJesus and Kelly Kwantoro. Completing the roster are Julia and Jennifer LeMay, Lauren Miller and Tristan Adams.

Bigger made sure to mention the fans who have grown in number as the season has progressed.

"Our fans keep us going," Bigger said two days before the MCT title match. "They really important. They give us energy. I'm very excited about the final. We have a really good shot."