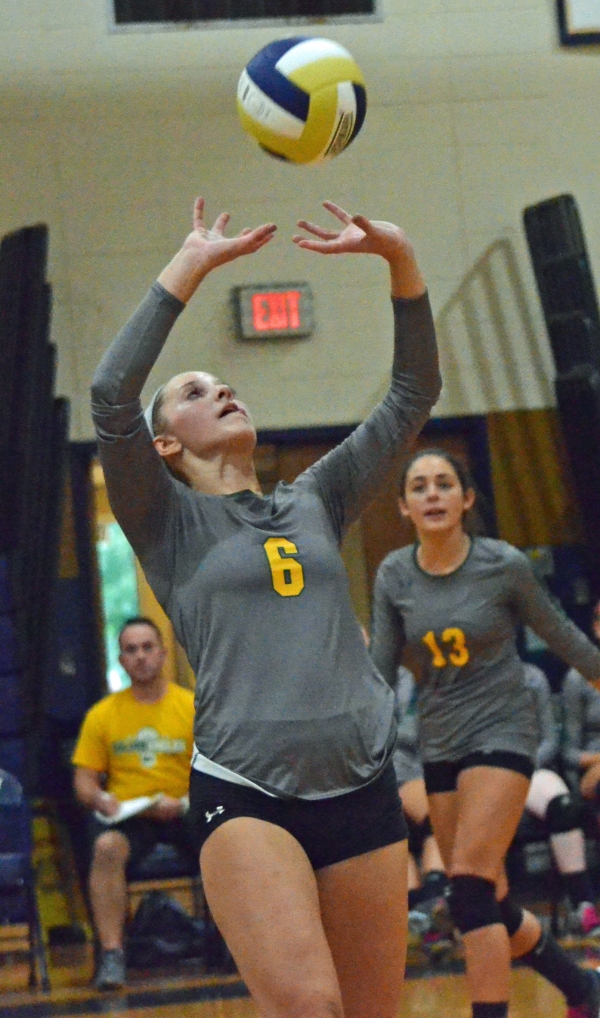 ROXBURY _ Down a game versus Roxbury and battling to close out the second game, Morris Knolls did not let doubt creep in.

The Golden Eagles had two match points but the Gaels managed to stay alive. Morris Knolls closed out the critical game on Brooke Herman's kill and then gained a seven-point lead in the decisive game.

"We came in really wanting to win," said Morris Knolls libero Michelle Slomkowski. "At practice, we scrimmaged and worked on being in close matches. We stayed positive when we were down a few points. We heard each other and had each other's backs. We were motivated."

The second game was certainly trying. However, in the decisive game, the Golden Eagles (3-2) likely were feeling confident after pulling ahead, 21-14, on a series of errors by Roxbury. The Gaels then scored five of the next seven points and got within four, 23-19. Again, Morris Knolls dug deep and capped the match with a kill by Meghan Torkos.

"The girls responded to adversity," Golden Eagles coach Jolyn Veres said. "It got pretty intense. We encouraged them and helped them push through. Roxbury came on strong and we were finally able to shut the door. It's hard to pull away from Roxbury. You have to play every point and play until the whistle."

After it dropped the first game, Morris Knolls, which missed a lot of serves, steeled itself for a hard-fought second game.

"We told ourselves we could do it," said Slomkowski, who finished with 33 digs. "We said 'The set's ours' and 'We have it.'"

Roxbury coach Anthony McMichael felt the match, as always, came down to runs.

"The team with more consistent runs has success," McMichael said. "We had runs in the first game but couldn't get on a roll in the other two. Volleyball is a momentum sport, a rhythm sport. We were two evenly matched teams but they captured the rhythm better."

Jenna Shirkey, the Gaels' setter, was proficient at serving and running the offense. She had 19 assists and nine digs. Amber Chen had nine kills. Quinn Longo had 16 digs for Roxbury (3-2).