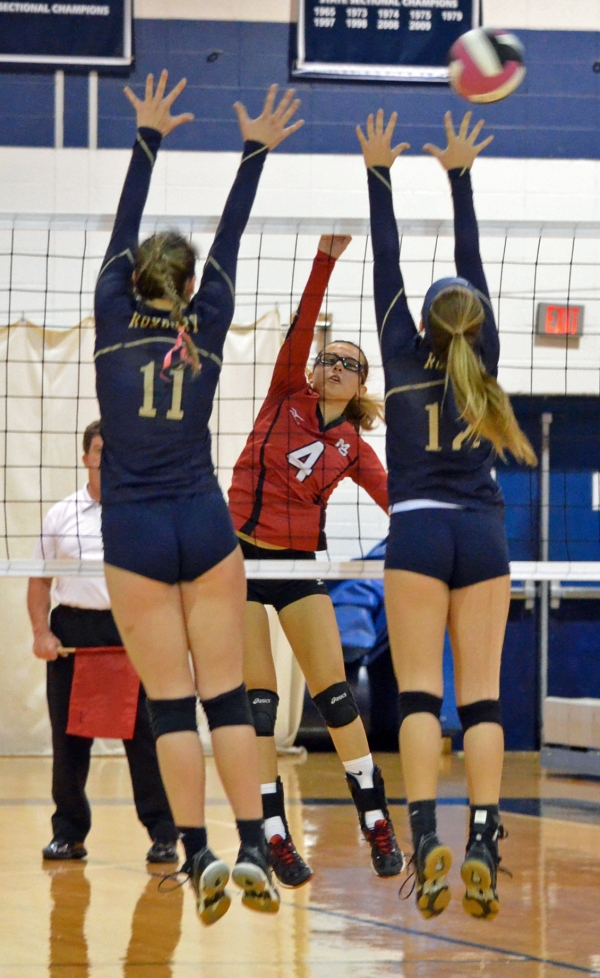 Rivera rested for four days during the week then attended a short practice on Friday. The Marauders Morris County Tournament semifinal versus Roxbury was looming and nothing was going to keep the senior outside hitter off the court. Family bragging rights were at stake, too. Rivera's cousin, Amber Chen, plays for the opposing Gaels.

Being sidelined didn't cause Rivera's skills to slump. She was in fine form in the semifinals, helping top-seeded and defending champion Mount Olive defeat fourth-seeded Roxbury, 25-13, 25-9, on Saturday, Oct. 21 by making eight kills and exhibiting maximum hustle.

"We did it with determination and motivation," Rivera said. "We don't want to lose our reputation. I had to be here. I was pretty confident I'd be back. I didn't want to miss this."

"Britney's competitiveness with her cousin had something to do with it," Mount Olive coach Lee Clowers said. "That was a big part of it."

The 5-foot-5 Rivera has a 30-inch vertical jump along with plenty of enthusiasm. She was airborne often and felt no effects of the vertigo.

"I had to eat, hydrate and sleep," Rivera said.

Something else put a bit more spring into Rivera's leaps, power into her kill attempts and desire to be wearing her familiar No. 4 jersey. For every match that the Marauders (19-2) win in under an hour, her mother, Cindy, owes her $20. The Marauders (19-2) dispatched the Gaels in 38 minutes so the younger Rivera was anxious to collect.

In the early semifinal, seventh-seeded Randolph was a 20-25, 25-18, 25-22 victor over third-seeded West Morris. Another Rivera cousin, Catherine Stingle, played for the Wolfpack.

Isabella Soriano, a junior setter, also reveled in the victory, which vaulted Mount Olive back into the final. Soriano, who had 23 assists in the semifinal, returned to action a week and a half ago after sitting out two games with a sprained ankle.

"It's definitely good that Britney's back," Soriano said. "I was glad to be back. We've had a lot of injuries and other players have filled in. Being able to defend is so great. I don't know how to describe it. Getting to defend our title motivates us even more."

Senior Ally Dombrowski is yet another player on the mend. Dombrowski, nursing a sprained ankle, looked on from the bench.

"When you have a lot of great kids, someone always picks up the slack," Clowers said. "That is what's been happening."

Mount Olive, which received 13 kills and six digs from Annie Karle, went up 4-0 in the first game and quickly extended its lead to 7-2. Karle was responsible for four of those points, making three kills and serving an ace.

The Gaels came within one twice, 8-7 on a kill by Kendall Torpin and 9-8 when a Marauders serve was long. Mount Olive was up 17-13 then reeled off the last eight points to take the opening game. The eight-point run began with a Rivera kill and was aided by several Roxbury errors. Lauren Miller had seven service points, one of them an ace, to finish the game.

In the second game, the Marauders held two, three and four-point leads before taking command. Karle put Mount Olive up 9-5 not with a kill but with a well-placed dink. From there, the Marauders scored seven of the next 10 points to widen their advantage to 16-8. Following a long serve by the Gaels, Mount Olive commenced a nine-point run which was highlighted by three kills and a block by Karle.

View the embedded image gallery online at:
https://soar-nj.com/sports/volleyball/item/1463-vb-semis#sigProId69fa04d661
More in this category: « Knolls rallies past Gaels Two in a row for Mount Olive »