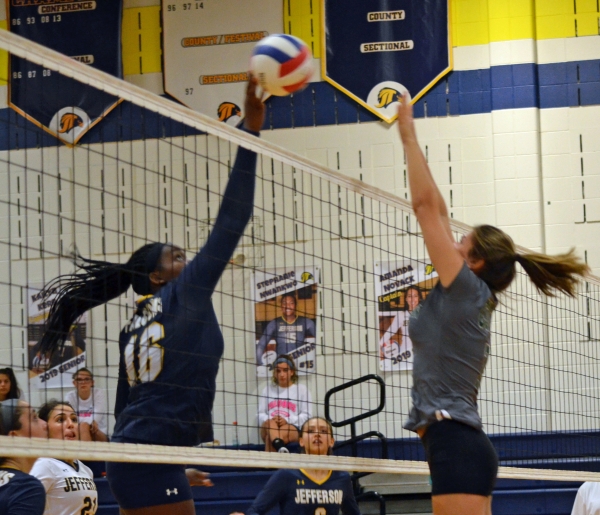 Photos by Sandy Seegers Amanda Nwankwo of Jefferson, left, goes up for a kill in a match versus Kinnelon.
Rate this item
(5 votes)
Tweet

JEFFERSON _ Always six inches taller than most girls her age, Jefferson's Amanda Nwankwo was rarely challenged when driving the lane during basketball games in middle school.

Nwankwo would make her way into the key and encountered little or no resistance.

"Everyone would back up," Nwankwo said. "They didn't want to get run over."

Three years later, Nwankwo, now 6 foot 3, remains an intimidating presence and is making an impact on a different court during her first year in high school. On Tuesday, Oct. 8, Nwankwo excelled in the first varsity volleyball start of her career, making eight kills and six blocks to pace the Falcons to a 2-1 win over Kinnelon in NJAC-Freedom Division match.

The victory was a monumental one for Jefferson because the Colts came into the match with a perfect record in league play and had not lost to a Morris County team. So, when Jefferson took the third game, 29-27, the Falcons felt a great sense of accomplishment, celebrating as if they had captured a championship.

"This is very rewarding," said Jefferson sophomore setter Emily Carcich, who had 21 assists and three aces. "From the start, we needed a lot of energy. We came together so well. We played the best we've played this year. We kept our heads in the game. We didn't think of past mistakes. We played every point like it was the last. We gave it our all."

Prior to the match, Falcons coach Gino Rose met in the hall with his quad captains - Carcich, Antonella Maffei, Kailyn Kerr and Amanda Novack. He told them "to fire up the team and keep them going for the entire match." In the locker room, Carcich, Maffei, Kerr and Novack did what they were instructed to do. They charged up their teammates and went out and prevailed in the first game, 25-19.

Nwankwo, making her debut, did not play like a freshman, exuding confidence and coming through with several kills and blocks.

"I wasn't really nervous," Nwankwo said. "I was ready. The coaches have been teaching me well. I worked my hardest. I think I did OK."

Rose made the decision to start Nwankwo, who had been playing junior varsity and seeing some varsity action, because he felt she was capable of a dominant performance.

"We needed a taller, bigger block in the middle," Rose said. "It's nothing against the other blockers but Amanda is a physical presence."

Carcich was happy for Nwankwo and said "she showed up and did what she had to do."

The two teams engaged in a hard-fought battle in the second game, too. Kinnelon had the upper hand in that one, 25-21. Jefferson trailed by three or four points early on in the decisive third game but was able to pull even, 22-22, on a Colts error. With Kinnelon up, 24-22, and seeking game and match point, the Falcons scored the next two points for 24-24. Neither squad would yield and there were three more deadlocks. Jefferson closed out by tallying three of the last four points.

The pressure of the close games didn't bother the Falcons, who are anxious to get some type of title this season or in the near future so their banner hanging in the gym won't be bare.

"It didn't get to me," Carcich said. "I think everyone else did fine, too. It was the excitement and the will to win. Everybody was loud. We were saying 'Always give your all' and 'Let's get it.' We really, really wanted this win."

As for Nwankwo, she intends "to keep swinging."

"I'm never going to back away," she said. "I'm very proud of everyone. I'm glad to be on this team."

The victory over Kinnelon commenced a five-game winning streak. The Falcons' mini run was halted by a setback to Roxbury in the MCT quarterfinals on Oct. 19.

More in this category: « Two in a row for Mount Olive